The FIRE Movement is Morally Wrong 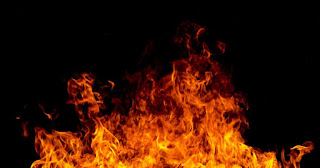 I can't read any financial news or Blog without seeing at least a few daily articles on the FIRE movement.  FIRE stand for "Financial Independence Retire Early" and was made popular by Blogs like MrMoneyMustache.com and OurNextLife.com.  It's a concept which promotes saving 80% of your salary early in your career by living very frugally.  By doing so you have the ability to retire in your 30's or 40's by continuing to live frugally. There are so many sites now pitching this concept that feel that they are empowering todays youth.  Here is a short list for reference:


I can't express enough how I completely disagree with this concept of people that want to bail out of existence and pretend its great.  I am no fan of Suzy Orman and don't condemn the idea for the same reasons, but agree with her that bailing out is cowardly and not a good life move.


In the article I read, generally people are getting out of life somewhere in their 30's with around $750K-$1M.  I don't know the precise statistics are but this is my perception of the norm.  They follow the 4% rule and live on $35K -$40K per year.  The money will have to live in solid return stock investments investments that will need to play dodgeball with inflation.  The article I've reviewed is from the The Mr. Money Mutache Blog, "How to Retire Forever on a Fixed Chunk of Income", November 29, 2018.  In this articles example the person is 35 and has 1 million dollars saved.  The goal is to provide and income of $40,000 per year to live on.  It looks something like this. 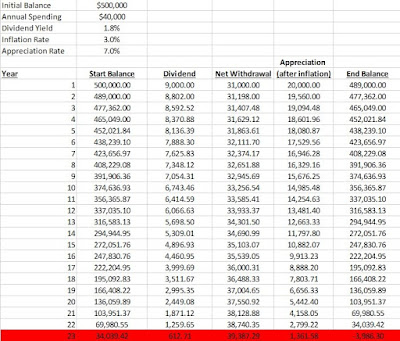 My first question id who the f*%k wants to live on $40K per year?  Not me, no way.  As with so many skeptics I see many basic problems on the horizon.  For example:

Problem #1:  The guidance is to invest $500K in taxable accounts assuming the other $500K is in retirement vehicles which can't be touched until 59 1/2.  To make this work, the investment has to earn 7% return plus 1.8% dividends for 22 straight years.  What happens if this is not achieved or worse yet a complete stock market meltdown?  The news I read every day suggests one is on the horizon.  Here is what the situation looks like if your average returns go from just 7% to 5%.  Now what do you do? 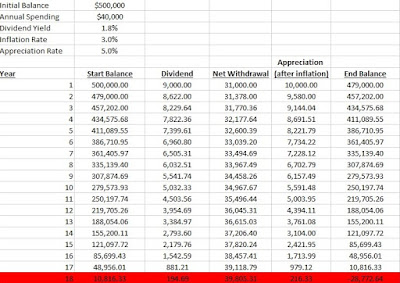 Problem #2: The article does not mention children.  The only mention is part of an example for low cost medical insurance as part of a family plan, but the insurance is complete crap and has a $6,500 individual deductible.  At 35 years old you are in prime child raising years.  Therefore, there is no way this concept works well if you have children.

Problem #3:  You are pissing the prime high income earning years of your life away and can never get them back.  Not to mention, once you are out of the workforce for any extended period of time it is very difficult to get back in for many reasons.


Problem #4:  The unknown.  There is no way you are going to live for 40-50 years and now have some form of catastrophe.  For example, here are some obvious and immediate reasons that are not mentioned:

So these "FIRE Flies" leave because they hate the 9-5 daily grind.  Well no shit, who doesn't.  If you are willing to get out of the work force because you hate your job, why would you not have the same risk tolerance for starting your own business even if it is very small?   Something that you have a passion for and look forward to doing every day?  Something that has the potential to earn an income that keeps you reasonably above the damn poverty line?

Believe it or not though the reason I primarily disagree with the movement isn't because of the obvious reasons previously mentioned.  Hell, if you want to roll the dice and assume the risk of f*#king up your future with no time to recover, go for it.  The main reason I totally disagree with the movement is my kids.  We have totally f*#ked them over.  I know this may not sit well with everyone but I believe we are greatly indebted to them.

Climate change alone will put unbelievable strain on their lives.  Things we have ignored over the last 30 years and they will have to deal with pretty soon.  I am not an environmentalist, and truly a capitalist, but you have to be an ignorant bastard to not see what's coming for them.  Natural disasters have already cost 23 million working life years since 2000 and the number is accelerating.  It has displaced 22.5 million people and by 2050 will force 700 million people to emigrate.  This does not bode well for future generations and likely will not help their financial situation. 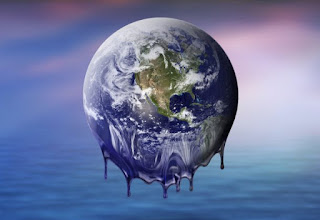 Also, artificial intelligence (AI) is predicted to take almost 30 million jobs over the next 25 years.  This is going to be a bigger problem than people realize and will affect many demographics significantly. 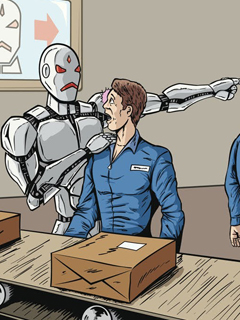 So where does that leave our kids?  I'm not sure but here is my opinion.

I was fortunate to inherit some money from my parents.  I didn't piss it away but was very responsible with it and invested well.  From what I can see, most of the FIRE movement is comprised of professionals with very good salaries which is how they are able to get out early.  By saving a large portion of a high salary.

So I'm 32 making $100K per year with $800k in the bank and have one or two young kids.  I wake up one day and because the Mustache says freedom is a imperative so I jump in with both feet.  I pray for nothing catastrophic to happen and I dwindle my savings down over the next 30 years.  I pray to die before I'm 70 because the likelihood of something not happening that will chew up my money is pretty low.

If I worked just one or two more years and gave all of the money to my kids through some type of an financial vehicle, like a down payment on a house, secondary education or pay off their school loans, invest in their business, or fund an IRA which could grow for decades.  I could literally give them a 10+ year head start in life by just working one additional year.  I'm not saying to hand over a bunch of cash to your kids and let them buy a bunch of bullshit.  Let them find their way in life, let them struggle a lot.  You will know when the time is right to help them.

I honestly feel our children will pay a steep price for our sins and the acceleration of global warming and Artificial Intelligence (AI) will just amplify that.  Don't be a bunch of lazy bastards and cowards by jumping out in your 30's and 40's.  If you can't take it anymore, quit your current job and start your own gig.   Just my opinion.....